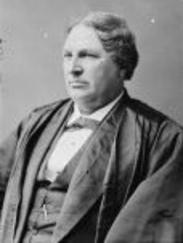 ​The Lee County Iowa Historical Society is dedicated to preserving the history of Lee County, Iowa.

Samuel Freeman Miller  was born in 1816 in Kentucky and grew up on a farm. He earned a medical degree from Transylvania University in 1838 and practiced medicine for ten years. During that time he taught himself law and was admitted to the Kentucky bar in 1847, abandoning his medical practice. Miller became more interested in politics after he became an attorney. As member of the Whig Party, Miller was opposed to slavery, a position that caused him difficulty because of the increase of pro-slavery sentiments in Kentucky.

In 1850, he moved to Iowa, a state which aligned more with his anti-slavery views. He established a law practice in Keokuk and became a prominent member of the Republican Party and a supporter of Abraham Lincoln's presidential campaign in 1860. Lincoln appointed Miller to the U.S. Supreme Court in 1862 where he served until his death in 1890.

In 1859 Miller built this three-story brick home at 318 North 5th Street at a cost of $13,000. Miller and his family lived in the home only two years before departing for Washington. In 1965 the Lee County Historical Society bought the property and it was listed on the National Register of Historic Places in 1972. Today it serves as a museum.